and the Rifle No.4

CLICK ON THE ABOVE IMAGE TO VIEW CONTEMPORARY VIDEO OF
The Pattern '14 No.3 Rifle, the SMLE No.1 Rifle and No.2 Rifle, the No.4 Rifle and the FN-SLR Rifle and the EM2 Bulldog precursor to the current SA-80 Rifle, and Service Rifle Target shooting at BISLEY CAMP RANGES Post WWII

This rifle purports to be a .22RF version of the No.4 (T) Lee-Enfield sniper rifle of the Second World War. 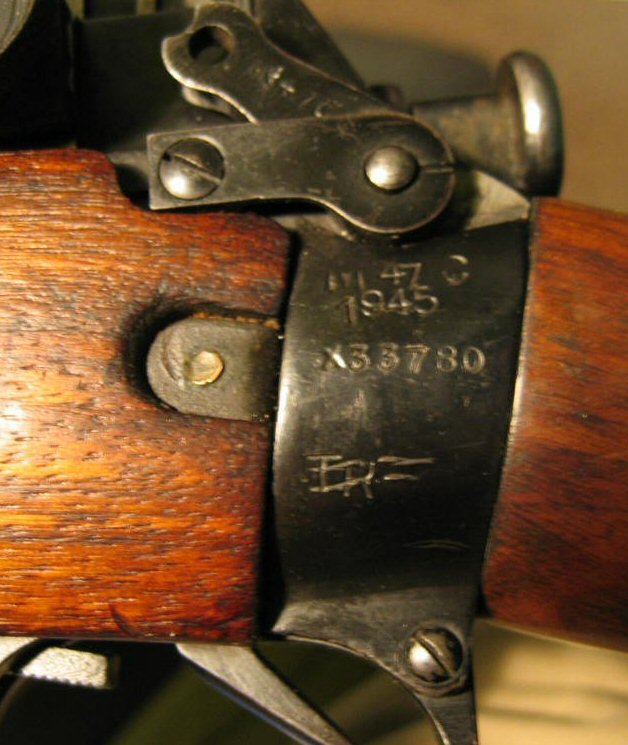 This example is a BSA ( Birmingham Small Arms Co.) manufactured rifle ( thus coded "M47C" ) and certainly has the background of being one of those original selections for the "T" rifle conversion. The left hand side of the butt-socket carries the familiar "TR" stamping, but which has been barred out. This can be seen in one of the images below. The right hand side of the receiver also carries the small "S" marking on the lug at the forward end. 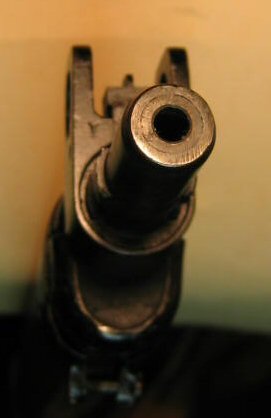 These rifles were apparently used at the School of Musketry. The known examples at Warminster were reported as carrying a plate on the butt with the designation

Whilst BSA did manufacture solid barrels, produced for a batch of approximately 2,500 plus spares, for the .22RF No.7 training rifles for the Royal Air Force, this particular example is fitted with a sleeved barrel similar to the Parkerifling system utilised by Parker-Hale for their .22RF No.9 rifles built for the Royal Navy. 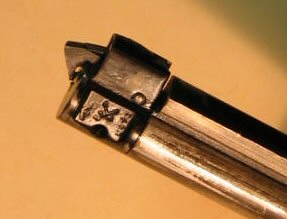 The bolt of this example is to the same design as that of the No.9 rifle, with a .22 bolt-head similar to those previously fitted to the Lee-Enfield training rifles of both 'Short' and 'Long' type from the turn of, into the Twentieth Century, but of the No.4 rifle design. These simply replaced the full-bore centre-fire bolt-head, with the main modifications being the removal of the forward firing-pin section from the striker and its replacement with a separate firing-pin, struck by a shortened striker. This new pin fitted into an offset counter-bored hole, drilled into the rear of the bolt-head, to accommodate it in a position suitable for the rim-fire cartridge. Finally, the extractor was replaced with a narrower fabrication for the .22 cartridge rim. Early on, these bolt-heads were modified from .303 heads by plugging the striker hole and re-drilling offset for the new firing-pin. Latterly, the bolt-heads were of new manufacture - as is the case for the unit on the displayed rifle. It, also, is stamped up " M47C" and is therefore of BSA manufacture.

The telescope fitted to the rifle is a No.32 Mk.2 which appears to have been refurbished. It will be seen, by the eagle-eyed, that the upper ring clamps, marked for ease and certainty of correct fitment, have been transposed. This will need to be corrected! 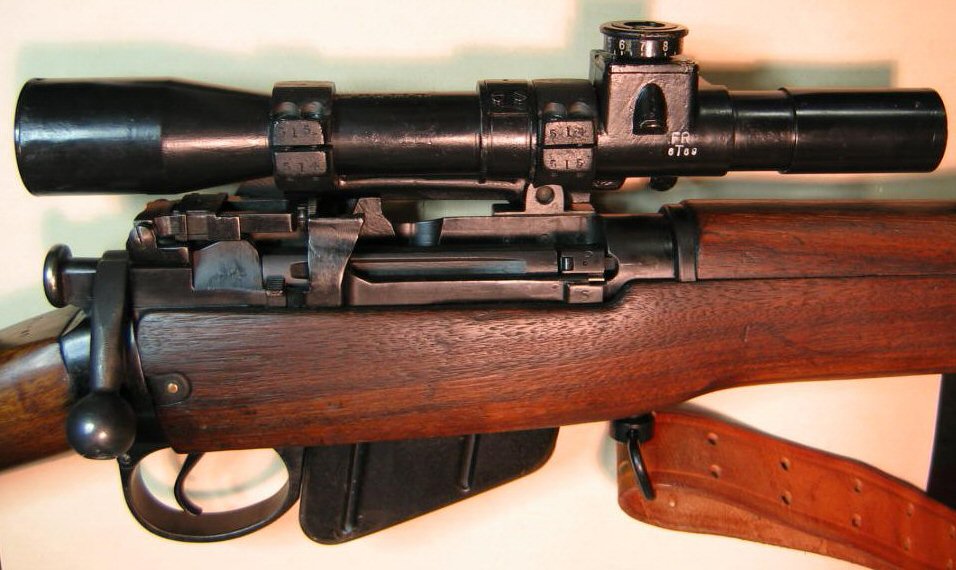 The bolt will be seen to carry the "button" style cocking piece, as was more usually the case on the No.4 (T) rifles 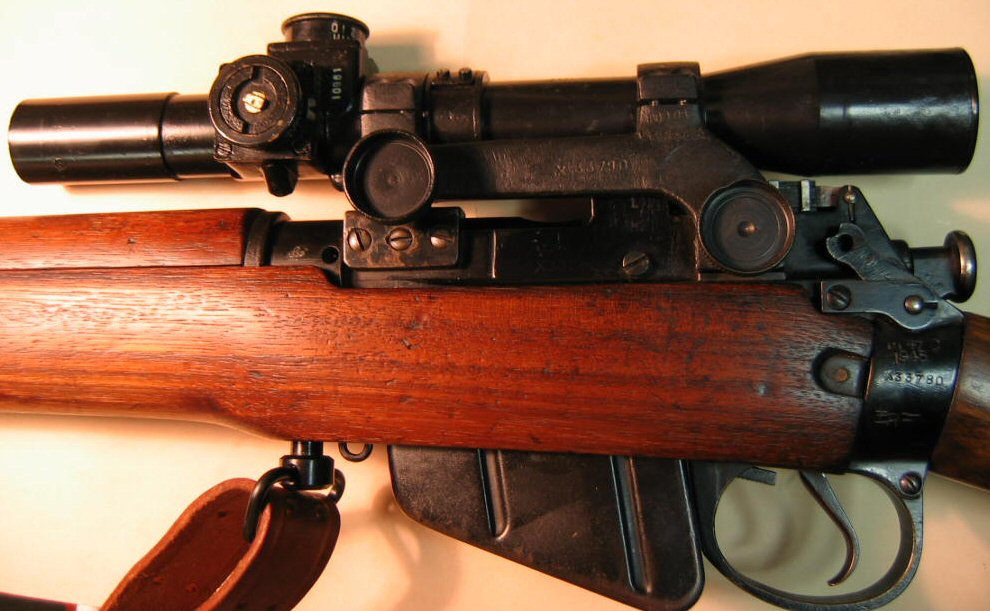 The rifle is fitted with the magazine stamped with a serial number matching that of the rifle, but the .303 loading platform has been replaced with that from a Canadian No.4 training rifle - the C No.7  of Long Branch manufacture.

This is a single loading magazine with a fluted platform facilitating the hand loading of the small .22RF round. In the early .22 training rifles, such as the No.2 Rifle and the .22RF version of the No.1 Mk.III and III*, the original .303 magazine simply had the spring and platform removed - the empty magazine case then acting as a receptacle for the extracted fired cartridge cases. This was a very tidy and "range friendly" system but, the .22 round being somewhat fiddly for large-fingered recruits, loading was made tricky and a dropped live round ended up amongst the empty cases, with the attendant risk of its presence there being overlooked! 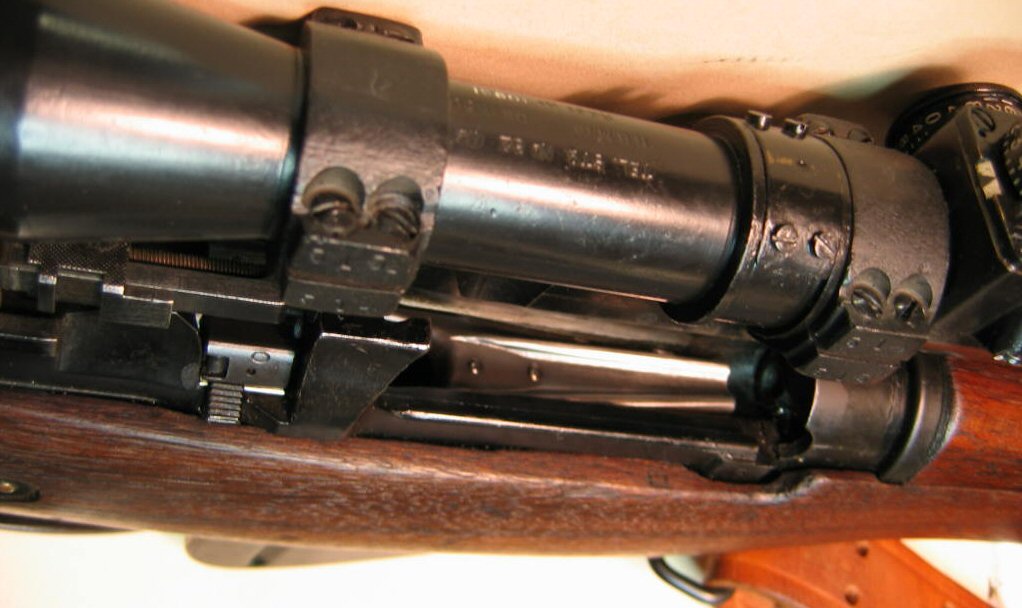 The Enfield training rifles Nos. 5, 6 and British No.7 were each magazine loading, with a magazine of five round capacity -(these were the first British designed Enfield adopted rifles to be so configured since the War Office Pattern Miniature rifle of 1906 - a gap of forty years). All others were single shot - including the Canadian C No.7. The C No.7 magazine would have been a sensible choice for a sniper training rifle, particularly facilitating loading under a 'scope, whilst obviating the complexity and expense of a magazine-fed conversion.

It has been occasionally been reported that, at a time in the 1939-1945 War when Britain was threatened with invasion, units of home defense were set up to act as guerillas in the event of occupation by foreign troops. These units were intended to harass the occupying force specifically by targeting senior officers and administrators belonging to the invading army. In order that this scheme could be secretly put into operation, hides and bunkers were constructed in isolated places such as woodland. These camouflaged hides were to be the homes, for months at a time, of individual trained resistance style operators. It is understood that some of these units were issued with .22 rifles which were extremely accurate at comparatively short range and at the same time relatively quiet in report.

The existence of such hides has never been in question; it is, even now, not unknown for one of these confined, and usually brick-lined, hide-aways to be discovered by chance in woodland somewhere. The presence of a few are recalled by those still here to tell the tale, although the numbers privy to the whereabouts of any hide were kept to an absolute minimum - the main reason that numbers probably still lie undiscovered. The hides were built and provisioned with such stores as may have been required to lie untouched for long periods - only to be accessed should the country become subject to an invasion. Arms and ammunition were sealed in along with tinned victuals. Both small-bore and full-bore rifles were included in the specialist inventory. It should perhaps be borne in mind that a silenced small-bore rifle could be as useful for the provision of fresh food as it would be as a covert weapon. Even Axis rifles were stached away in these hides, notably the K98 Gewher, on the sound basis that ammunition for these might prove more readily available in the event of an occupation by German forces.

Some of these .22 rimfire rifles have been noted as being moderated arms, assembled using bought-in civilian rifles. The Public Records Office archives show that Parker-Hale were certainly given a contract to supply 660 .22 calibre silencers in mid-March of 1942, (see "British Small Arms of WWII" - I.Skennerton), and these are mooted to have been fitted to Winchester Model 74 semi-automatic rifles configured with the No.42 straight-sighting telescope, for use by specialist "Home Guard" units of the type previously mentioned. Should anyone hold further information on this subject, or an example of such a rifle, then we would be most grateful to hear of it. More can be read on this subject in relation to the Winchester Model 74 (see also Winchester Auto and Winder rifles )

A further candidate for this manner of work would have been the silenced miniature version of the DeLisle carbine. This .22RF weapon was prototyped by DeLisle but never put into production although, had an invasion taken place in a Northerly direction or the war become more protracted , such a weapon could certainly have come into its own. It is quite possible that it would have joined those other designs of arms purpose built for the Special Operations Executive, (SoE), such as DeLisle's famous silenced .45 calibre carbine conversion of the Short Magazine Lee-Enfield service rifle, used in covert operations. Sadly, no observable example of the two or three .22-inch prototype silenced carbines made at Dagenham exists, the only one held in public safekeeping having been mysteriously stolen.

Whether such a rifle as a .22 No.4 (T) might have been issued for any such purpose is doubtful, indeed almost any suitable commercial small-bore sporting rifle was drawn into service where necessary. The example rifle shown here is of 1945 manufacture and was certainly not used in this way, and their use solely for sniper training is a much more realistic supposition.

However, the notion of a Lee-Enfield sniper training rifle in .22 inch calibre had not yet been entirely lost when the few No.4 T rifles fell from use at the Small Arms School. The idea resurfaced as recently as 1977, with a proposal to convert the No.8 rifle by the addition of a No.32 telescopic sight and the replacement of the but - and possibly even the fore-end, by a No.4 butt or all the wood furniture from an L42A1 - the conversion of the WWII No.4T rifle to a 7.62mm NATO calibre sniper rifle that was introduced around 1971 and still in use during the Falklands conflict in 1982, close on 40 years after the parent No.4 rifle had been manufactured. See the Lee-Enfield Rifle No.8.

Thank you for taking the time to view this page. We hope it has been of interest