and the L12A1 adapter unit

The Birmingham Small Arms Company prototyped a sleeved version of the L1A1 in .22-inch rimfire calibre.

used, in one guise or another, in almost every British Service longarm since that time.

The images on this page are by courtesy of the Trustees of the Enfield (M.O.D.) Pattern Room Collection - late of the R.S.A.F. ( Royal Small Arms Factory),

Nottingham, and now gifted to the Royal Armouries Museum at Leeds.

The collection still continues as a working reference library for Small Arms of the World and maintains its acquisitive remit to that end.

and the fore-end woodwork marking, right,

BSA's conversion of the L1A1 did use a removable tubed sleeve akin to the later Heckler and Koch L12A1 conversion unit shown later in the page,

but included disabling of the full-bore gas operation system, which precluded easy reconfiguration of the modified rifle to its original format.

The .22RF barrel sleeve is considerably shorter than the 7.62mm parent barrel;

probably just adequate for short range use up to around 25 yards, especially if compared with the barrel length of a .22RF target pistol.

and ".22LR" (for the Long-Rifle cartridge) overstamped.

The rifle carries the designation "E.X.P. No 6" alongside the manufacturer and year code " UB59".

The .22RF magazine has a stepped feed platform to permit staggered loading of the rim-fire round, maximising capacity as in the full-bore version.

The breech-block is below shown almost engaged with the breech-end of the inserted .22RF barrel sleeve.

The rim-fire case extractor lever can be seen protruding forward into the machined bevelled slot in the breech chamber reinforce section which,

in a manner akin to the barrelling of the Rifle No.8 , itself protrudes rearwards into the receiver,

here a necessity due to the fitment of the .22RF chambered section into the chamber of the 7.62 mm full-bore chamber.

(With the No.8 rifle this was done solely to shorten the bolt travel).

The example below is the full-bore service L1A1 rifle fitted with the Heckler & Koch L12A1 .22RF (rim-fire) conversion kit and a muzzle extension tube which,

affixing to the bayonet lugs, covers the slots of the muzzle flash-hider.

This extension was apparently originally intended to limit any unwanted gas-flow effects when the low-energy rimfire round was fired through the full-bore muzzle arrangement.

However, it was not included in the production conversion kit.

CLICK ON THE ABOVE IMAGE TO VIEW CONTEMPORARY VIDEO OF
The Pattern '14 No.3 Rifle, the SMLE No.1 Rifle and No.2 Rifle, the No.4 Rifle and the FN-SLR Rifle

The L12A1 kit, whilst officially notated as a conversion unit, might more properly be described as an adapter unit,

since a conversion would more usually be expected to be a non-reversible modification. Such semantics justify, earlier on this page,

our description, as a 'conversion', of the original experimental modification by B.S.A. (the Birmingham Small Arms Company),

of one their own licensed production SLR rifles, to .22RF calibre.

This conversion could not be returned to its full-bore service configuration by simple removal of replacement adapted parts, as is the case with the rifle here shown.

Below, we illustrate the rifle broken to facilitate the fitting or removal of the adaptation components.

The standard top-cover lies upper left in the display, with the rim-fire breech-block arrangement beneath it.

To the right of the breech-block, and in line, is the .22RF barrel sleeve with its chamber section which engages with the 7.62 mm cartridge chamber of the parent arm.

This is the modern equivalent of a system devised more than a century earlier;

namely the Morris and Aiming Tubes used with the Martini and Lee-Enfield rifles of the late 19th. and first half of the 20th. Centuries.

Indeed such sub-calibre tubed sleeves preceded these for the breech-loading Snider Enfield and other similar longarms!

The magazine, converted to accept and feed the .22 rimfire round, lies at the top right; two of these were supplied with each kit.

Below are copied the pages of the manual issued with the conversion kit,

which manual gives a brief specification plus fitting and maintenance instructions for the unit.

Images by courtesy of the trustees of the Enfield Pattern Room Collection.

It will been noted that the H & K unit, with a full-length barrel sleeve,

could be expected to shoot reasonably accurately at up to 100 yards range.

The Warminster Collection holds an explanatory cutaway model of the .22 magazine. 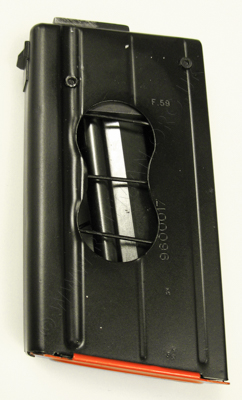 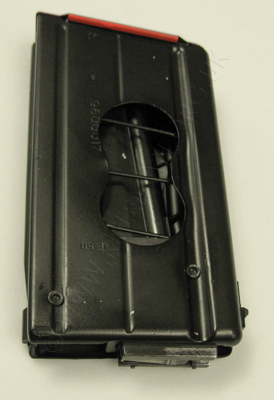 Above is illustrated the original Belgian F.N. rifle that has been adapted for military use, with only minor modifications,

by all European NATO countries. It is not available for commercial sale for in its military form it contravenes the regulations of most countries,

being a prohibited weapon by virtue of its feature of fully automatic operation at a single pull of the trigger.

For Target practice or Police use the trigger mechanism of the " COMPETITION " Model is modified enabling the rifle to be used as a self loader,

i.e. with the magazine loaded a single shot will be fired at each trigger pull until the magazine is emptied, when an automatic device operates to hold the breech open.

The weapon is gas operated with an adjustable regulator to ensure certainty and smoothness of operation without excessive recoil.

The bolt is mechanically locked before firing can take place and is not unlocked until the bullet has left the barrel.

The bolt is in the forward position when the trigger is pressed which avoids disturbance due to a more or less heavy mass moving forward at the moment of firing.

After firing the mechanism extracts the fired case and feeds a new cartridge into the chamber as long as there are any cartridges in the magazine.

When the magazine is empty, the bolt remains to the rear, indicating to the firer that the magazine needs refilling.

Magazines are provided to hold either 10 or 20 cartridges. A folding carrying handle is convenient for transporting the weapon at the trail position.

Blade foresight with protectors is mounted on gas cylinder.

AMMUNITION
The rifle is designed for the NATO Service Cartridge of calibre 7.62 m/m (.300").

The commercial equivalent of this cartridge is designated .308" Winchester of which several well known brand makes, including Swedish NORMA, are readily available.

Other videos are available from our Enfield Video Page

With the introduction of the new British service rifle in 1954, the U.K. NRA published a short article in its journal to give basic detail of

the replacement for the Lee-Enfield No.4 Rifle with the first general issue automatic assault rifle to serve with British Forces

As a searchable flip-page facsimile

originally published in the August edition of 2004