This page includes drawings and the manual

Unusually, we have FOR SALE one of these rifles that is duplicated in,
and therefore surplus to, the Rifleman collection.

Below is an image of the second (serial no. P2 ) of the five prototype rifles made for the Mk.III International

The rifle in the 3D image below can be rotated through both axes by dragging your cursor left to right.

It can be zoomed and panned by clicking with the magnifier, and viewed full screen using the arrows top right.

These rifles were probably designed in the very late 1950s and built and tested in 1959 to 1960,since the production model was announced early in 1961 after considerable modification,as related on this page.

and longstanding staff member of the Eley ammunition company.

and selection for the team which went to the Tokyo Olympic games in 1964.

This rifle was indeed taken to Tokyo and used in those events.

A further image of the same rifle later fitted with a Redfield target 'scope for "any sights" competition.

( The fore-sight would be removed before shooting)

rivetted into the front of the action, which supported the fore-end furniture

clear of the barrel for its entire length.

by the single-point rifle sling, by now in common use.

The substantial steel hanger of the prototypes proved far too heavy for normal usage.

It was replaced in production by an aluminium alternative,

the spur of which clamped into the action below the barrel. More of this anon. 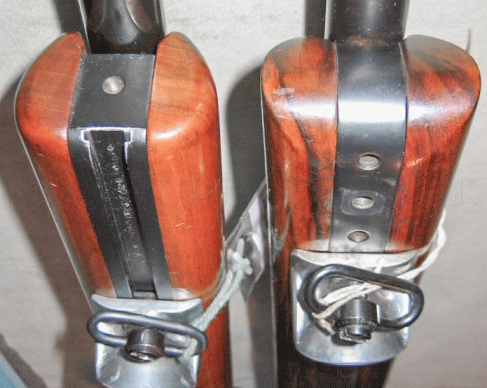 To the left is an image illustrating

the prototype and production

The steel prototype is on the left,

production item on the right. 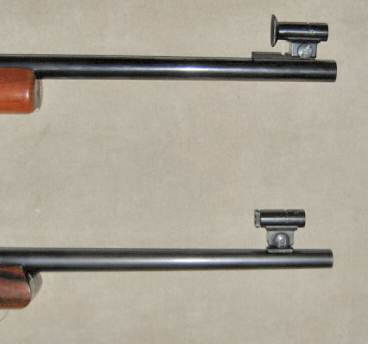 In an attempt to counter the

excessive weight at the

front of the rifle, the barrel

was tapered on the prototypes.

reverted to the parallel barrels

hitherto familiar to owners of Marks I and II rifles.

On the tapered barrel, a higher foresight block was needed to bring the tunnel to the correct height 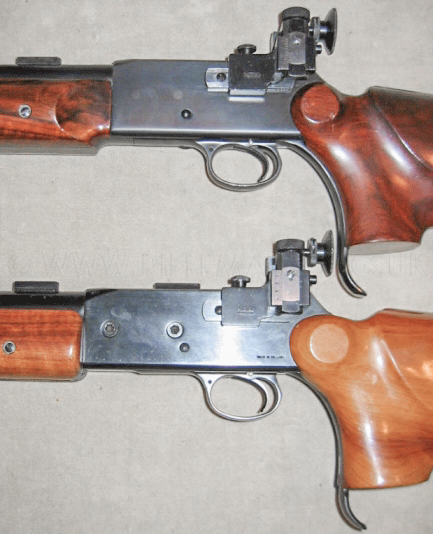 In the image to the left, the upper action is that

of the prototype. The two central flush rivets

clamping the barrel and hanger into the action

are just visible; a third rivet, low down just

forward of the trigger guard assembly, is not here

visible. The end of the action locating pin can be

clearly seen. A glance at the views below of the

RHS of both actions will clarify the point.

The fore-end woodwork of the prototype was

faired neatly back into the action along the lines

of previous marks. This aesthetically pleasing

feature was omitted from the production model of

the Mk.III and from all subsequent models -

probably on the basis of cost. 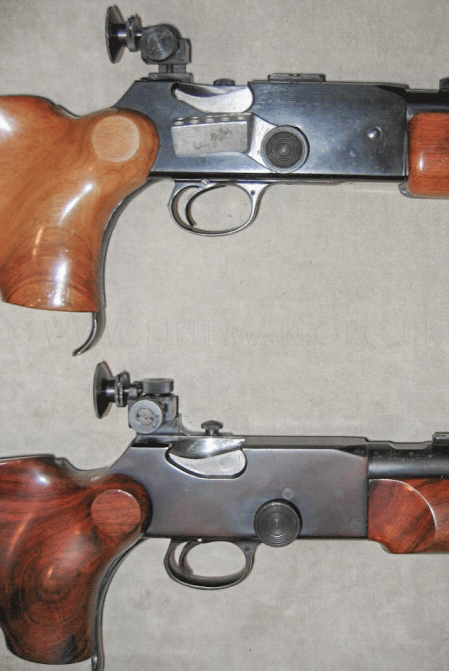 The third rivet is just about discernible at the

bottom right-hand corner of the action side-

plate of the prototype rifle - the lower rifle in

this image. The large knurled head of the

screw-in action locking pin is evident in the

same position on both actions.

The prototype rifle is fitted with 'scope

mounting blocks only on the barrel.

This production rifle has

an additional block above the action.

The next image below is taken

from below the two actions.

The differences in shaping to the front of the

action are quite apparent, as is the way in

which the two hangers are clamped into the 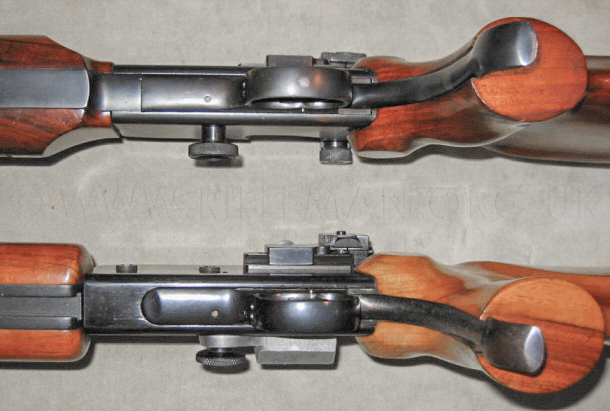 The production rifle, much heralded replacement for the Mark II,

was announced in the shooting press in theSpring of 1961. 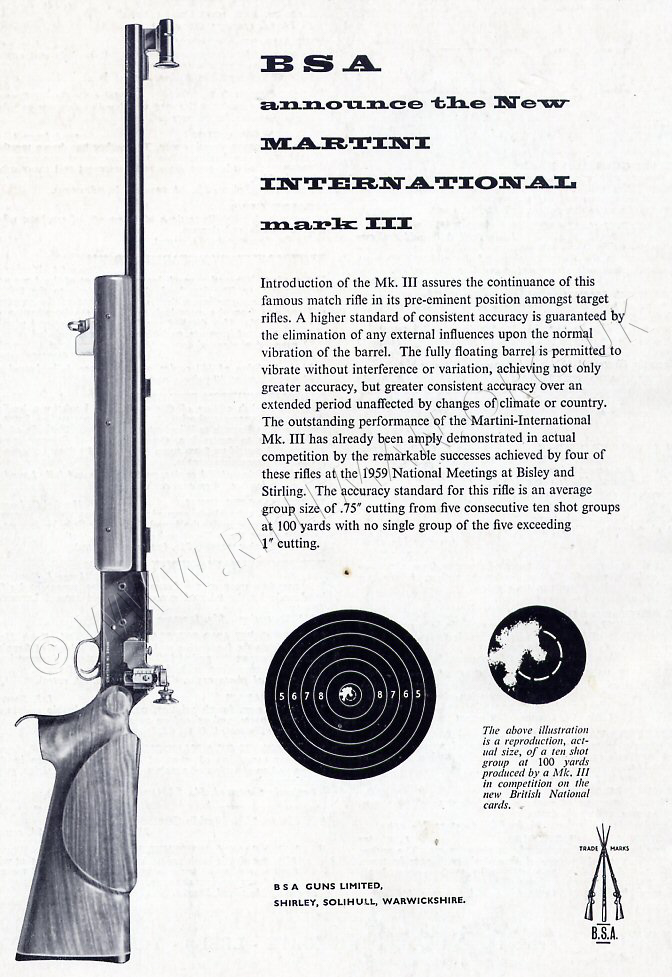 Below: the production model of the Mk.III International rifle.

The rifle was advertised in the Parker-Hale catalogue of 1962 at a price,

Contemporary rifles, such as the Finnish Lion and the Anschutz Model 54 Super Match,

A good International will shoot every bit as well as an Anschutz of much lesser age.

A colleague was still using his Mk.III in County competition with a high degree of success in the late 1990s.

The Mk.III has a fully floating barrel, but the main consideration with these is the aluminium hanger

to which the fore-end is fixed.

if the aluminium has been bent or damaged, or if the clamping screws have been incorrectly tightened.

A good Mk.III will perform as well as any if the hanger is in perfect trim.

With the later Internationals, there had developed a general feeling that they

- but that is true of almost any firearm.

However, master these aspects and you will not be disappointed.

We have Mk.I to Mk.III rifles being shot, in the Post-Veteran class of our historic leagues,

at a level which many modern Anschutz users would be pleased to match.

with the sling attachment solely on the furniture, then you would have produced a formidable rifle.

BSA should perhaps have done this themselves. Also, the fact that BSA did not provide the customising

accessories with their rifles, such as were on offer from other European manufacturers,

was no doubt a factor in poor sales in the final years.

Additionally, whilst the Marks IV and V were re-tooled, the configuration was, for all practical purposes,

returned to that of the Marks I and II rather than progressing beyond the Mark III.

One might suspect that this did not help very much, particularly at a time when Anschutz

and their contemporaries were significantly updating their rifles aesthetically as well as technically.

It could today be argued that modern fashion trends are selling rifles more than technical advances in design.

One of the .22RF Jurek Target Rifles designed and built by Dr. M.K. Jurek in, we believe,

- as did the Finnish Lion and other equivalent models of the time.

BSA produced some of the best barrels of the day, fine Martini actions and excellent triggers,

but were left behind in many other respects. Very sad.

An International is still the rifle to use for any timed competition, e.g. the Queen Alexandra second stage.

what should perhaps have been expanded upon in the preceding paragraphs

is the fact that the problem with the Mark III,

in respect of the aluminium fore-end hanger, was probably what most damaged theInternational's reputation.

The Marks IV and V were not wholly successful attempts made toward the recovery of that reputation.

The prototype Mk.III rifles had steel fore-end hangers which were quite satisfactory in all respects except weight.

These were very heavy rifles that would have been unacceptable to rifle shooters at large.

or damaged if the rifle fell over from a rack, for instance.

The clamping of both the hanger and barrel in the action body could then be affected.

The torque applied to the clamping bolts was critical and,

because the bolts were centrally placed between the steel barrel and the alloy hanger,

the same clamping force was applied to dissimilar metals.

The alloy, being more ductile than the steel, could eventually become more loosely held

than the barrel and affect the whole setup. In the subsequent models, the Mark IV, ISU and Mark V,

the reversion to only the barrel being clamped into the action body cured this,

but was not sufficient of an advance to restore anything

other than the status quo achieved by the very successful Mk.II.

The brochure published by BSA at the time is represented below

- the zoomable text is just about legible. 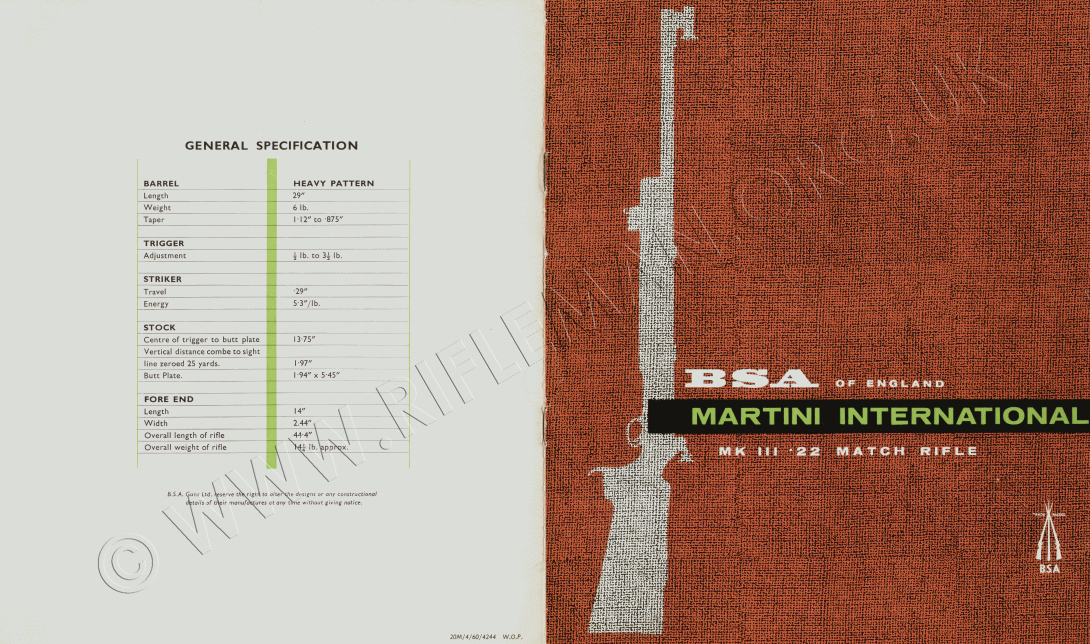 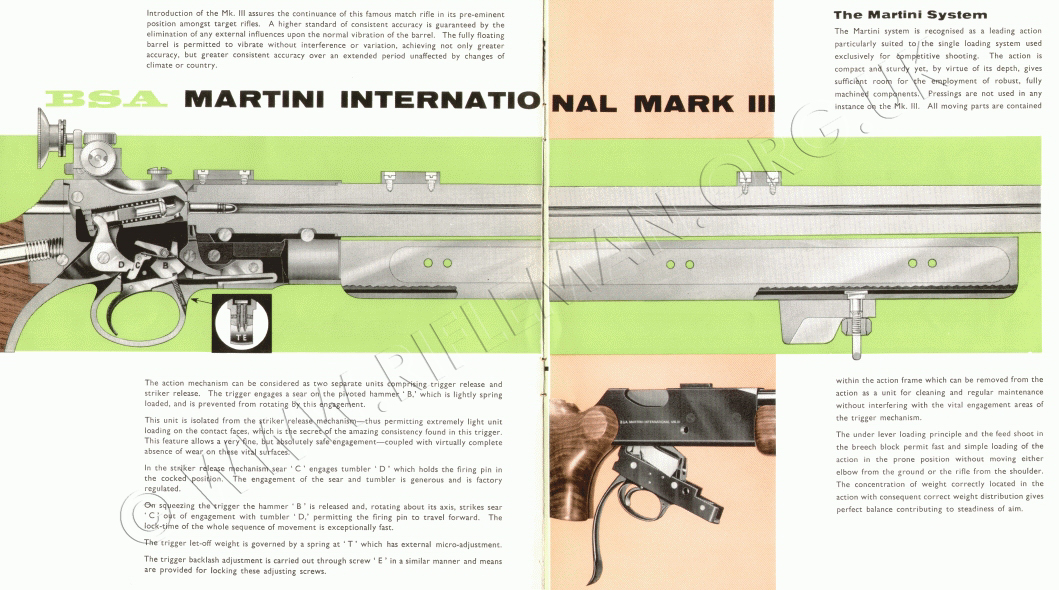 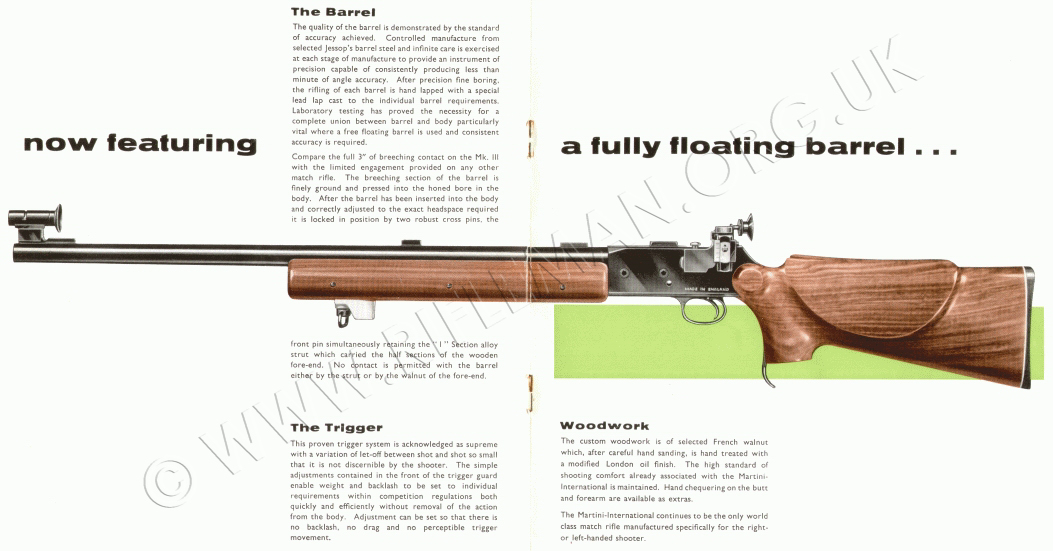 - an expensive option for the day.

Images of the system are shown below. 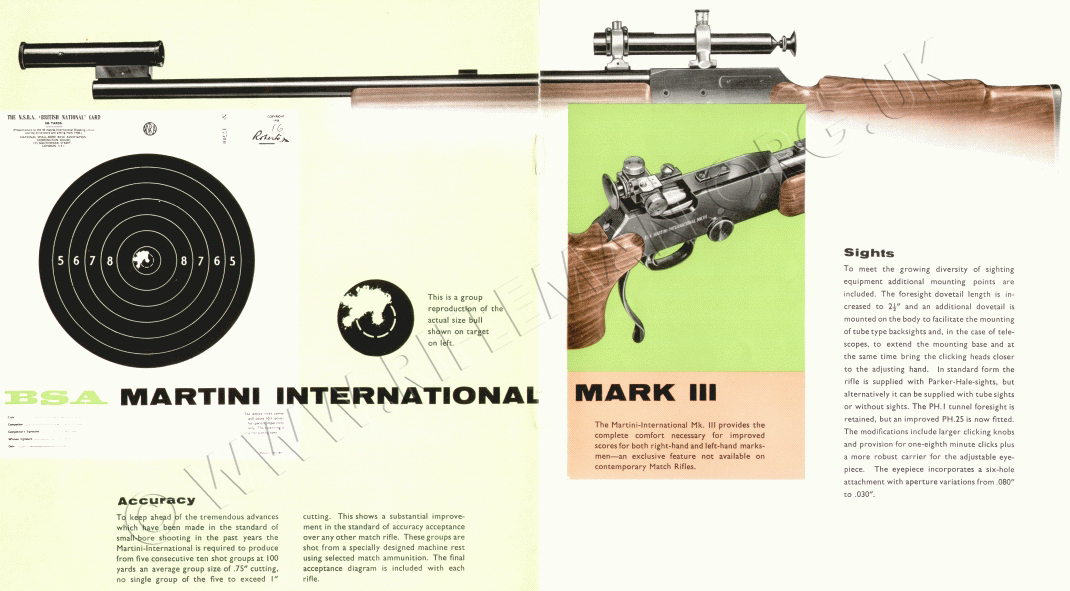 was a popular optional extra in the mid 1960s.

As will have been understood, if the page on the original BSA Martini International has been first viewed,

Al Freeland was responsible for the design of the stocking of that rifle. 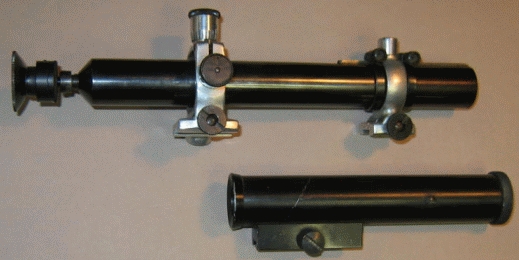 With the associated tunnel fore-sight,

the Freeland system became a well-

many shooters felt that the pivoting of the

rear-sight tube for elevation and windage

adjustment, similar to that much utilised

on telescopic sights of the day,

which was standard issue with the International rifles.

It was really a case of each to his own!

The idea was of sufficient interest in the U.K. for a British Champion shot, the late Andrew St.G. Tucker

- best known for his range of shooting jackets,

to arrange for the manufacture of his own tube-sight system, illustrated below. 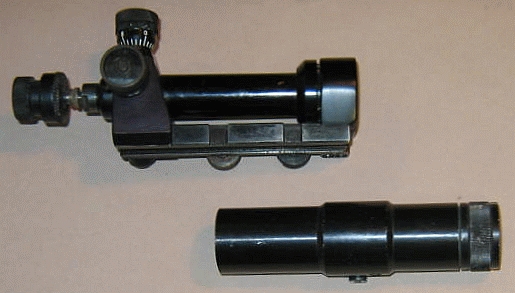 made by the Birmingham Small Arms Co. for publicity purposes.

The fore-end hanger can clearly be seen where the fore-end woodwork has been cut back.

Two images of this are shown below, courtesy of the N.S.R.A. 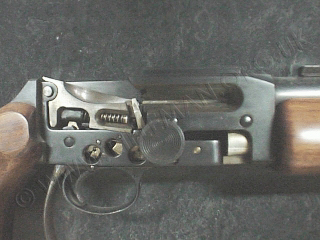 Below is a reproduction of the pamphlet that came with each new Mk.III rifle

and a detailed cross-sectional drawing of the rifle with a notated parts listing. 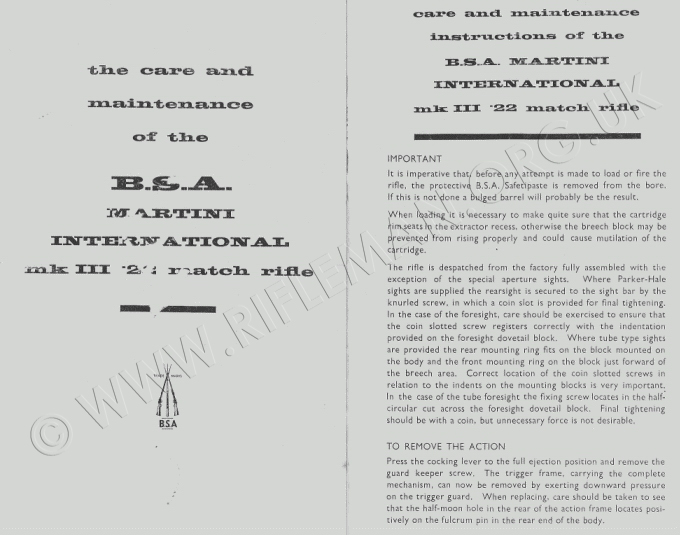 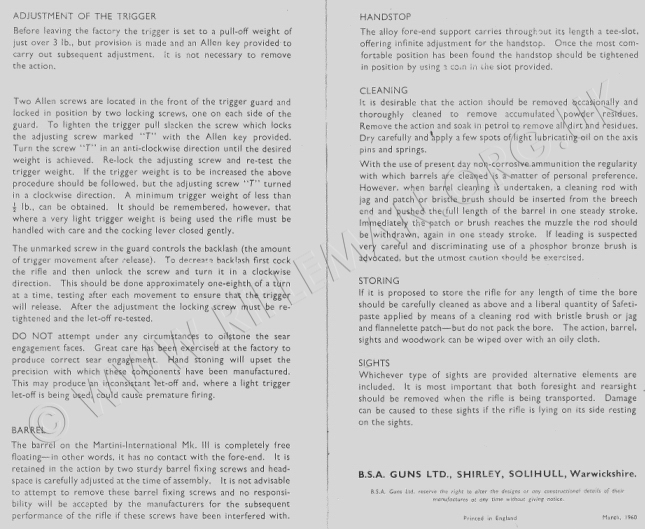 Also supplied with each new rifle was this folding card

relating to the Parker-Hale sights supplied as standard.

The Mk.III had an improved Model 25 rearsight with one-eighth minute clicks

instead of the one-quarter minute clicks of the Mk.I and Mk.II rifles' sights. 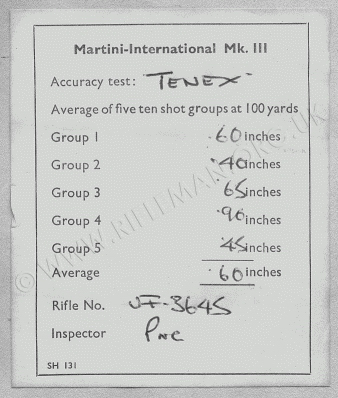 and averaging the five groups to an overall group size - in this case 0.60 inches.

Nonetheless, groups of around a half inch at 100 yards

would still be competitive over forty years later.

Interestingly, the groups were fired onto a sighting diagram roll sheet

presumably from earlier days when the Birmingham Small Arms Company

was manufacturing these rifles and testing them with Mk.VII .303 centre fire ammunition.

The old saying "waste not, want not", much vaunted in the 1939-45 period, was obviously still in mind twenty years later.

A generation on, and one cannot help but feel that the advice may have been forgotten.

Only one of the five diagrams is illustrated of the 30 inch section supplied from the test range's continuous roll group testing target system. 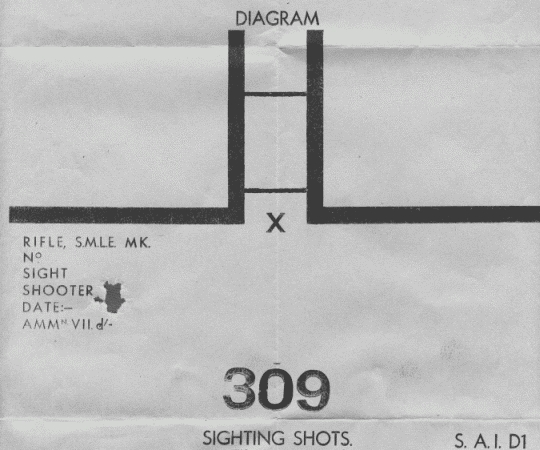 B.S.A. aimed to manufacture their

International barrels to perform to a standard

better than a three-quarter-inch group at 100 yds.

Centralising the group was evidently not considered particularly important.

Indeed, illustrating the excellent level of accuracy to the purchaser

was no doubt the overriding consideration.

Finally, not long after the introduction of the Martini International,

a requirement was found for a smaller lightweight version for ladies,

youngsters and other persons of small build.

These rifles were shorter in the butt-stock, and shorter and lighter in the barrel.

The Mark III was no exception. BSA manufactured both lightweight and left-handed versions of the rifle.

The example shown below exhibits both characteristics.

The barrel length is 26¾ inches as opposed to the 29 inches of the standard Mk.III rifle.

Below, the reduction in barrel diameter of the lightweight rifle can be seen just forward of the action,

where the standard barrel diameter remains protruding only about one-eighth of an inch. 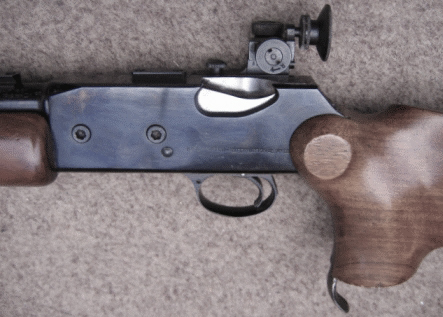 The markings are low on the rear quarter of the action body side:

The serial number has a "U" prefix only.

The original Lightweight International rifles - of 1950-54 vintage - exhibit only an "F" prefix. 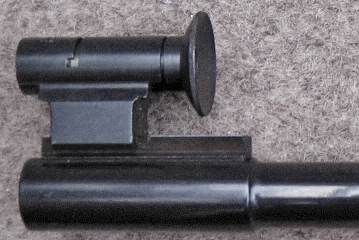 Above, the barrel diameter returns to standard just behind the foresight mounting block.

Otherwise a special block of increased height would have needed to be manufactured solely for these rifles.

As may already have been seen on the page for the Mk.II rifle, a Martini International's day is never done!

Not only are these rifles still regularly in use, in as-manufactured original form, for historic competition,

but they can be found metamorphosed into benchrest disciplines, as with the modified Mk.III shown below. 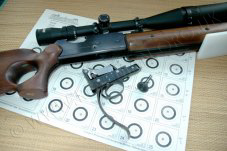 Or see the "bull-barrelled" Mk.V shown on the page for the Internationals Mks IV & V.

Are you seeking spares for your small-bore B.S.A. rifle?