Clabrough & Johnstone conversions for the SMRC

specifically for the Society of Miniature Rifle Clubs for sale to members and Nation-wide associated rifle clubs.

Below: a conversion of a B.S.A. & Co. manufactured Lee-Speed patent commercial "Volunteer" or "Trade Pattern" model, probably of the Lee-Metford Cavalry carbine, to a training/target rifle in .22 rimfire calibre

The rifle is fitted with a five round magazine from which the loading platform and spring have been removed. Extracted rimfire cartridge cases simply drop into the empty magazine body in the manner of many such converted rifles.

Depending upon the certainty of the original parent arm's model and configuration, it is possible that the carbine's mid barrel-band has been removed, although if a Trade or Officer's Pattern model then it might well not have had such a band at all. If present, it would have lain about two inches forward of where the tangent rear-sight is mounted. There is a small step just visible at that point on the underside of the fore-end wood, and the line of the fore-end has been so raised here that the removal of wood has broken into the original drilling for the clearing rod. This rod was housed in the fore-end via a drilled clearance-hole passing through the bayonet-bar of the original nose-cap, now replaced with a slender oval ring band. There is a screw-eye, for the forward sling point, now screwed into the clearing-rod hole. The presence of a clearing-rod at least confirms the carbine to have been fitted with a baynet-bar at manufacture. There is possible evidence, to be drawn from the cut-out in the top-line of the wood-work just forward of the butt-socket on the left-hand side of the rifle, and the associated machined recess and drilled hole in the receiver, that the action of the parent carbine was once fitted with an early model of side-mounted safety-catch. This could date the arm to manufacture between 1889 and 1892.

We illustrate below a representation of an almost contemporary B.S.A. Company's catalogue advertising the various models of equivalent Lee-Enfield carbine then available. The Officer's models shown are fitted with B.S.A.'s patent "Improved Pattern" safety, with a sliding shotgun-style catch over the wrist of the stock, intended to be more familiar to gentlemen accustomed to such safeties on their own sporting shotguns. The military-style bolt cocking-piece mounted safety was available with these models on request, but remained a standard fitment to the less expensive Trade Pattern and Sporting models. All models still carried the bolt dust-cover, the "charger-loading" conversion of the Lee- Enfield Mk.1 (Mk.I C.L.L.E.) not being introduced until 1907, and even then little in evidence until closer to the First World War. ( The 'new' shortened rifle design, the S.M.L.E., with the same five round cartridge-clip loading facility, had been introduced in 1903)

Clicking the image below will take you to the page carrying complete BSA catalogues from 1908 to the 1930s - in PDF format.

Below is an image for comparison between the .303 inch calibre full-length "Long" Lee-Enfield ( also a BSA manufactured Lee-Speed patent example), and the considerably shorter converted .22LR rimfire carbine . Whilst the converted carbine is compared with a "Long-Lee" rather than the parent carbine, the image well illustrates the degree of slimming of the fore-end wood-work.

The cavalry carbine bolt-handle was flattened against the butt-socket and had the ball-end ground with a flat. This modification was to facilitate the holstering and removal of the carbine from the horse's leather saddle-bucket in which the arm was traditionally carried, usually to the right-hand side. Any bolt dust-cover originally fitted has long since been removed. The bolt is the original for the carbine, and is of the cocking-piece safety type patented by Joseph Speed, (later manager of the Royal Small Arms Factory at Enfield), and initially fitted both to the Mark I Lee-Metford carbine and subsequently the Mk. II Lee-Metford Magazine Rifle (then notated the Mk.II*) in 1895.

There is a page on-site showing the .303CF Model No. 2 Officer's Carbine in greater detail.

This conversion has been fitted with a London Small Arms Company designed aperture rear-sight with the eccentric cam action windage adjustment. This sight was first seen on their Martini-Henry/Metford/Enfield .22RF conversions, many also produced for the S.M.R.C. To gain the additional reach needed, to bring the aperture over the bore-line of the rifle, an extension arm carrying the aperture has been ingeniously fitted, projecting from the sight body which was initially designed to hold a central aperture. 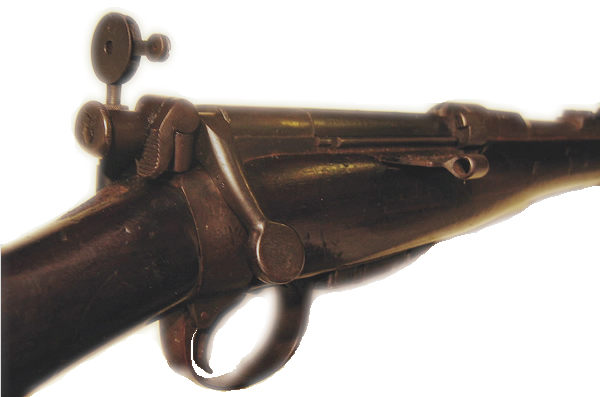 The name of the Birmingham based gun maker is clearly marked on the bolt body.

is evident from the marking applied to the left-hand side of the receiver body. 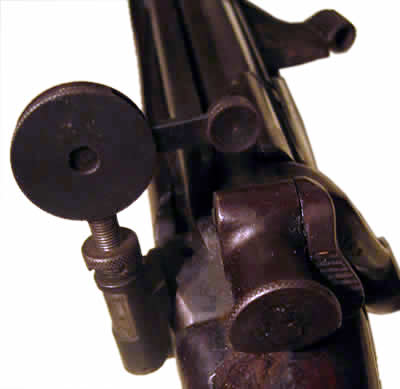 Left: the fitment of the LSA aperture sight is similar to that of the rear-aperture arm sometimes fitted for the long-range volley sights used on the "Long-Lees"- but rarely on the carbines. It is held behind the same "dumb-bell" spring, screwed to the left-hand side of the butt-socket, that would have retained the now dispensed with volley-sight 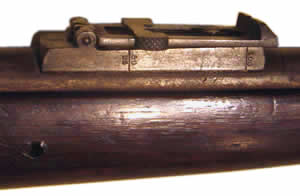 aperture-arm. The LSA sight's windage arm can be turned rearwards to a detent on the elevation spindle, and the whole elevation arm can be rotated forwards and down, in the dumb-bell spring detents, to lie out of harm's way alongside the receiver.

Right: the rifle can then be used with its original tangent-leaf rear-sight in the military fashion for open-sighted competition. This sight has been moved forward of its original mounting point by a distance registered by the screw-hole remaining in the fore-end woodwork, in which the fixing screw was held to which the leather sight protector hood was attached on both sides of the carbine. (See the Martini-Metford MT carbine). The rear-sight would have been centred over this screw-hole. The far, left, side of the sight body carries the original range markings for the carbine's .303" cartridge, i.e., 200, 300, 400 and 500 yards. It can be seen that the shewn side of the sight has been additionally marked with 25, 50 and 100 yard rangings for the rimfire cartridge.

Above, the original, probably Rigby patent, nose piece with a bayonet-bar has been replaced with a slimmed-down version to fit the reduced size of the fore-end wood's cross-section.

The fore-sight is a tapered barleycorn dovetailed into a ramp not dissimilar to those fitted to some contemporary carbines and rifles.

The barrel reinforce carries the new calibre information very clearly marked. The barrel itself is a shortened version of those previously fitted to the .22RF conversions of the Martini Service rifles over many years. Its is a solid barrel, not sleeved with a .22 calibre tube such as those used in the Parkerifling system.

This BSA manufactured carbine would not have been one of them, but a small number, of the order of 150, Enfield manufactured Lee-Metford carbines were, between 1895 and 1896, issued with .297"/.230" Centre-fire Morris Tubes as additional equipment for training purposes. These "miniature calibre" adapters were first used on the Martini-action service long-arms. Such a weapon was the Martini-Metford MT carbine.

The image below illustrates the unusual recessed rimfire bolt-head and slimmed-down extractor claw. Most .22RF conversions recessed the chamber of the barrel breech to accommodate the rim of the cartridge. Here it is the bolt-head that makes that accommodation. It is worth noting that the bolt head is a modified original rather than a specially manufactured .22 item such as commonly utilised on the later conversion of the S.M.L.E. rifle; for instance, the Rifle No.2 Mk. IV*. The bolt-head here shewn is to the Deeley patent and thus marked " 19145/90" ( 1890). 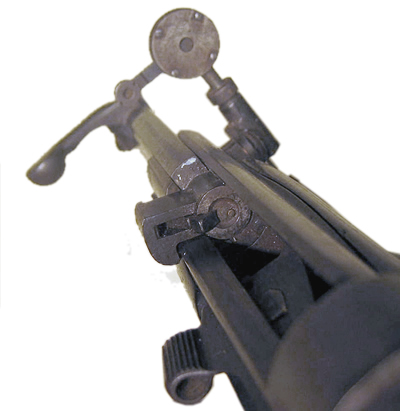 Below is copied a potted history of the Clabrough Bros., Clabrough and Golcher, and Clabrough & Johnstone companies, taken from one of their catalogues of the early 20th. Century.

John P. Clabrough was born in England and migrated to San Francisco California in 1863. He learned the American gun trade by working for various gun shops in San Francisco and in 1867 he opened a gun shop of his own at 630 Montgomery Street , San Francisco .

By 1870 John P. Clabrough had taken his two brothers, Joseph and George, as partners; the business became known as Clabrough & Bros. In 1871 or 1872, John P. and Joseph left George in charge of the store and John returned to England to manufacture guns and pistols in Birmingham , England for export to his (now larger) store in San Francisco .. Eventually he added sales offices in New York City , Philadelphia and Chicago , and then in other countries. George Clabrough of the San Francisco store became ill about 1876 and died in 1879.

In 1877 John Clabrough met William Golcher who had retired from the gun business in Minnesota , and persuaded Golcher to take a look at the San Francisco store. In 1878 Golcher took charge of the store, liking the area and the climate so much that he purchased half interest in the operation in 1883. After this date the guns were marked Clabrough and Golcher. In the late l880s, Clabrough reached its peak production of 10,000 to 12,000 guns a year, produced in factories on Birmingham 's Whittall Street and the now legendary St. Mary's Row.

When the l890 US Tariff was enacted, English exports to America began to decline. In l893 Clabrough sold his company to an employee named Douglas Johnstone and retired to San Francisco . Johnstone added another line of guns, under the name Clabrough & Johnstone, and he carried on the business until World War I. Like many English gunmaking firms, C&J was forced to amalgamate with other firms. In l9l4, they joined forces with Hollis, Bentley & Playfair, which were all under the management of John O. Redgrave, a lifelong Clabrough employee who became the proprietor in l9l8. In l937, battered by import taxes, then the Great War and finally the Depression, Clabrough & Johnstone closed its doors. All that remains today is the unique legacy of a gunmaker that had roots both in England and the American West Coast."

One of the most unusual and least known of all English gunmakers, J.P. Clabrough built high-quality guns in Birmingham specifically for the American West Coast.

The rifle below is a similar model to that previously illustrated on this page, again based on a cavalry carbine, but the fore-end woodwork has been further shortened, similar to those usually seen on the commercially available BSA rifles without bayonet attachment ( see page 13 of the 1908 BSA catalogue). This example is held in the Museum of the National Rifle Association at Bisley, Surrey.

Image by courtesy of the Trustees of the N.R.A. Museum

The above rifle is presently held in the collection of the National Rifle Association's Museum at Bisley, Surrey - on loan from Mr. James Hallam.