These Pattern 1914 designated rifles are not to be confused with their .303 counterpart, the famous British designed, and American manufactured, First World War "P'14" rifle that became the Rifle No.3 with the introduction of nomenclature by number in 1926.

A pattern of the above-mentioned rifle has been approved to guide conversion as may be ordered.

The conversion consists, generally, in boring out the barrels of rifles,short, M.L.E., converted, Marks II and II*, and fitting and soldering a tube in the barrel; the tube being bored, rifled and chambered to suit the cartridge, .22-inch, R.F., No.1 Mark 1 (LoC 13642), and in converting and supplying the following components-

Windguage: Shape of V-notch altered to U, and sighting edge repaired.

The following components of Rifles, Short, M.L.E., Converted Marks II and II* are not used in this conversion.

All other components of the converted rifles are common to rifles, short, M.L.E., Converted, Marks II and II*."

Thus it can be observed that the conversion consisted largely of the barrel sleeving ( see Parker Rifling), bolt-head and firing pin modification, appropriate sight alterations to bring the old rear sight V-notch into line with the then current U-notch along with the foresight height change to take into account the trajectory of the rimfire cartridge, and finally the removal of the magazine cut-off, which became irrelevant once the magazine had its spring and platform removed and became simply a repository for the fired and extracted empty cartridge cases. This last expedient resulted in the tidiest firing points perhaps ever seen up to that point - and indeed possibly since!

At the end of April 1916, a further two models of Pattern rifles were introduced, whilst the aforementioned original Pattern '14 became the Rifle, short, .22-inch, R.F., pattern 1914, No.1.

The first of the new conversions was the Rifle, short, .22-inch, R.F., pattern 1914, No.2 which used as its base arm the .303-inch centre-fire Rifle, short, M.L.E. Marks III and Converted Mark IV. The Short Magazine Lee-Enfields here converted were either the Mk.III or the Cond. Mk.IV, which latter rifle was already a conversion to the short rifle from either a worn or superseded Magazine "Long" Lee-Enfield or Lee-Metford rifle.

The second was the Rifle, long, .22-inch, R.F., pattern 1914 converted from rifles, C.L., M.L.E. Mark I*. ( This parent arm was the "Charger Loading, Magazine Lee-Enfield Mark I*" - colloquially known as the 'Long' Lee-Enfield in the form of the first mark to have the charger loading bridge fitted with a guide for loading cartridges into the magazine from a clip carrying five cartridges.

This is an early small-bore conversion of what was effectively a Short Magazine Lee-Enfield Rifle No.I Mk.I

This rifle was originally manufactured in 1898 by the London Small Arms Company as a " LE 1" (latterly known as the 'Long' Lee-Enfield Mark I). It was subsequently converted in 1904 to a " SHT LE Cond II " in the year after the introduction of the then 'new' short rifle. 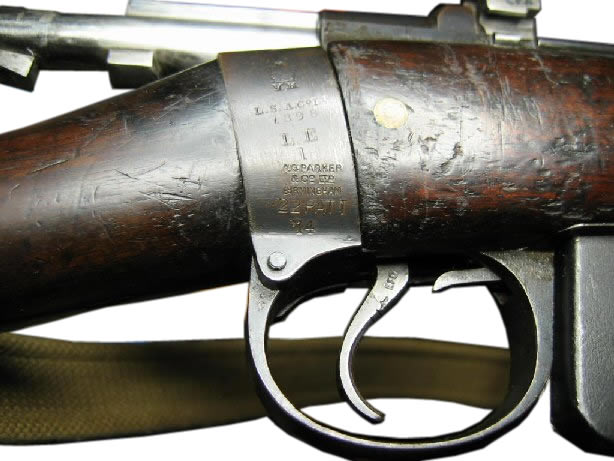 The bolt-head on this rifle still carries the sliding charger-loading guide of the No.1 Mark I rifle. This bolt-head has been removed on many conversions, and replaced with the ".22 No.2" type more usually seen on later training rifles such as the Mk.III and No.2 Mk.IV*,

The Long Lee training rifles were usually conversions of pre Charger_Loading Lee-Enfield rifles, and were not fitted with the charger-loading bridge as became the norm on later marks of SMLE.

It can be seen that, whilst the magazine cut-off slot is present in the receiver, the cut-off plate itself has been removed. There is little point in the cut-off remaining in place, because it would only be an obstruction to the collection of fired and extracted empty rimfire cartridge cases which simply drop into the magazine, from which the platform follower and spring have been removed. Neither would the presence of a cut-off much assist loading of the diminutive .22RF round into the recessed chamber. Space is required below the chamber for one's thumb, since the cartridge is usually held between finger and thumb.

An early means of magazine-loading these .22RF rifles was developed, but proved expensive to manufacture and problematic to maintain.

The rear-sight, below, was an expensive item to manufacture, with chequered bone inlay to the push-buttons that released the elevation slide to permit of its movement along the leaf to adjust for the required range.

The purpose of the bone was to insulate fingers from the heat which transferred into the sight leaf from a barrel which had been subjected to rapid fire, when the temperature could build up to high enough levels to cause a burn sufficient to blister the hand.

Such niceties were soon abandoned in the interests of economy and, particularly, the vast production numbers required leading upto and during the Great War (1914-18), by which time the rifle design had 'progressed' to the Mark III and subsequently the Mk.III* on which the magazine cut-off was - for a time- dispensed with.

The nose-cap of the No.1 Mk.I rifle had turned in fore-sight protector wings, harking back to the in-curved wings of the preceding "Long-Lee" rifles in their Territorial or Volunteer configuration. This feature was also deleted from the later marks of SMLE; indeed, the wings of the early versions of the Mark III, approved for service in 1907, were initially perforated, each with a slightly ovoid hole of about a half-inch in the minor horizontal diameter. This latter modification may have marginally lightened the fore-end of the rifle, but also allowed light onto the fore-sight; an improvement in low-light conditions in the battlefield. For whatever reason, this feature was later dispensed with.

The bayonet lug carries the rifle's serial number and the piling swivel for 'stacking' the rifles in the manner seen in the familiar 'piled arms' logo of the Birmingham Small Arms Company, who manufactured large numbers of these rifles during the First World War, not to mention the huge numbers of later marks of rifle, such as the No.4 Service Rifle and its sniping contemporary the No.4T of World War II, and rather smaller numbers of rather less common arms like the Boys Anti-Tank Rifle. One of their lesser known and intruigingly actioned magazine-fed post WWII training rifles was the .22RF conversion of the No.4 Rifle to the Rifle No.7 for the Royal Air Force.

See also the preceding training rifle conversions, made by the shortening of the various marks of obsolete Long-Lee rifle to the dimensions of the SMLE,

to the Rifles, RF Short Mks. I and II

Go to the main menu page for ENFIELD TRAINING RIFLES