First advertised by BSA in 1909, the miniature Martini Model No.6 used, in common with the military orientated Cadet and Model Nos. 4 & 5 rifles, their first small-frame Martini action.

For comparison, the image below shows, from top to bottom, the Model No.12, the Model No.13, the Model No.8 and the Model No.6 in take-down form. The Model No.8 was identical to the No.6 in every respect other than the fitting of a heavy target barrel, also of 25 inches in length, one inch diameter at the breech end, virtually the same width as the action, and three-quarters of an inch diameter at the muzzle. This accounted for the entire 12 oz. increase in weight of the rifle to 6lbs. 9ozs., from the 5lbs. 12ozs., of the standard basic Model 6. The marked taper of the early No.6 barrel is clearly evident in the image below. 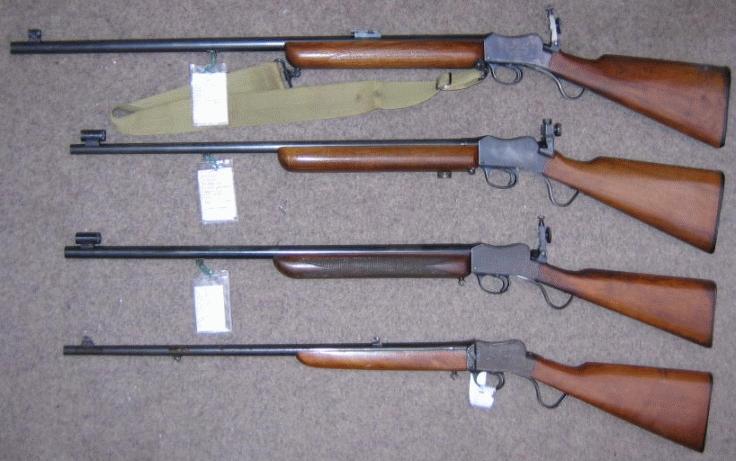 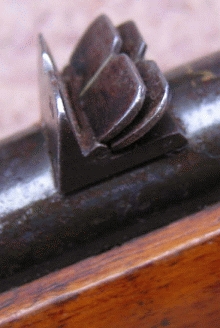 The Model 12 rifle is fitted with its original BSA No.19 combination (blade and ring-aperture tip-over arrangement) fore-sight, whilst the Model 13 and 8 rifles 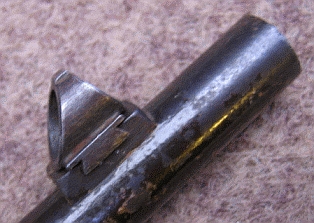 have been retro-fitted with the later FS22 or Parker-Hale No.2 tunnel foresights introduced in the early ninetenn-thirties. These sights permitted easy changing of aperture elements with different ring sizes for varying ambient conditions (or shooters eyesight). The No.6 carries its original barleycorn fore-sight and folding-leaf rear-sight with "V" notched leaves for 25, 50 and 100 yards. The standard rifle was usually fitted with a graduated traditional Martini style rear tanget leaf as illustrated in the 1909 advertisement shown lower in the page.

The No.6 was initially offered only as a one-piece rifle in standard configuration although, by 1912, the same rifle became available with a "take-down" action, which could be easily dismantled into two main components; the barrel with fore-end and the butt-stock with action. Unlike preceding miniature calibre Martini-actioned rifles, converted from full-bore Service rifles, the new small-frame actions were designed to be easily removed from the receiver body for cleaning and maintenance. A later, split receiver, take-down action was available from BSA for their Model 12 rifle (see bottom of that page). A similar split receiver design, of perhaps even earlier origin, was manufactured by W.W. Greener for some of his miniature calibre TARGET RIFLES , particularly those converted from the full-bore .303 calibre Martini-Henry or Enfield Service rifle action.

The Martin-Henry, Metford and Enfield actions were (and still are!) notoriously awkward to disassemble, adjust and reassemble. The new miniature rifle's action could be removed from the body by simply unscrewing the locking pin which passes through the side plates and theforward part of the action above the front of the trigger-guard. There was still no trigger adjustment possible, of either weight, creep or pull, other than by careful machining, grinding or honing of the sear and bent. Over enthusiasm could easily result in vertical mis-alignment of the action falling-block, in relation to the breech, along with either trigger component being rendered of no further use and in need of replacement. Over the ensuing years of production, this problem, along with others, was addressed inventively by W.W. Greener, Alfred Parker and other gunmakers with after-market modifications.

Below: the standard Model No.6 rifle had a flat-sided action body as did the No.4 and Cadet rifles. The take-down version, however, required the action width to be increased at the breeching end mainly to accommodate the threading required for the barrel thread locking screw. 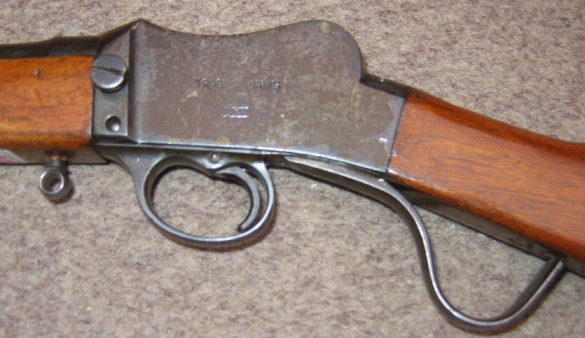 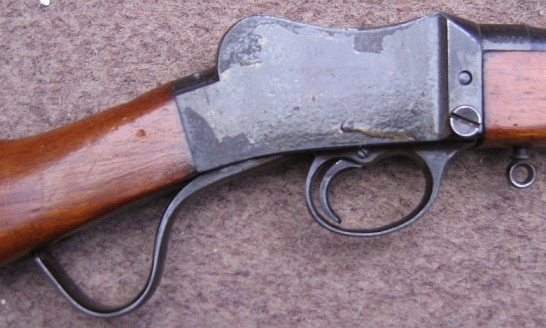 The actions of the various rifles can be viewed from above in the image below. 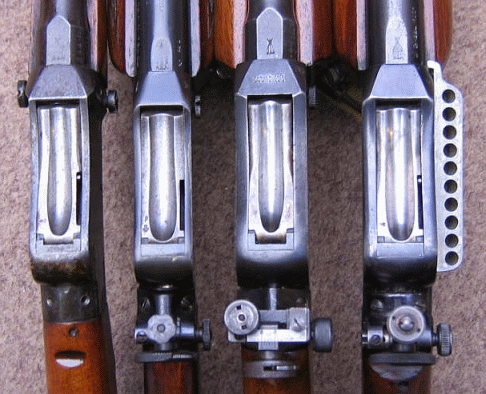 It will be seen above that the late model 13 rifle had the cocking indicator dispensed with from the RHS of the falling-block.

The Model 6, on the left, has had the rear of the action drilled and tapped for the BSA No.8 folding sight as fitted to both the Model 8 on its right and the Model 12 on the far right. The late Model 13 is fitted with a Parker-Hale No.7 rear-sight of the "Perfection" type as also used on the Vickers .22RF Martini TARGET RIFLES . This sight was drilled through at the mount base to permit the use of a cleaning rod through the hole at the rear of the rifle action. Most other rear-sights needed to be removed, along with the action, before the rifle could be cleaned.

The action width of each of the Cadet (No.4), the No.6 and No.7 models was a nominal one inch. Indeed, that action continued in use with the Model No.8 & 9 and the Model Nos. 10 & 11 rifles before being enlarged to approximately 1³/16 inches width on the Model No.12, 13 and following actions.

The image below is taken from the BSA brochure of 1909. 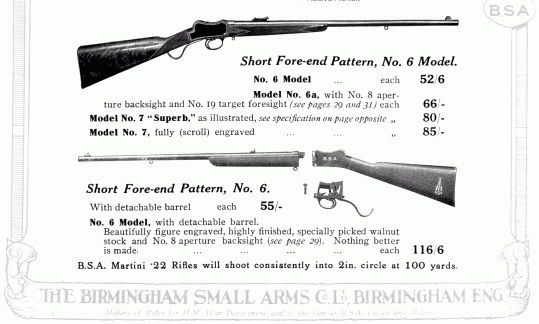 Below left: the rifle with both the barrel separated and the action removed. Right: the grooved breeching thread and the locking pin through the action body side plates, with its larger knurled knob to the right. The visible pin, with its smaller head to the left, is that for the action fixing and release. 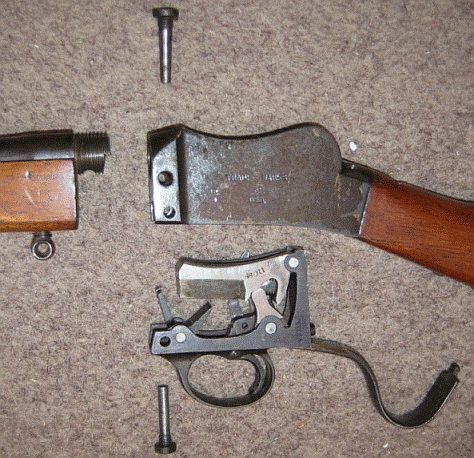 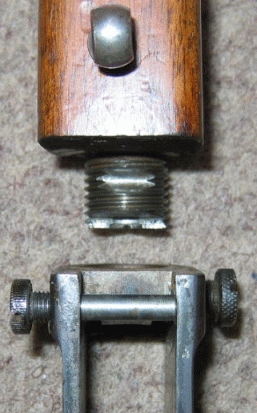 At the rifle's inception, BSA obviously felt that there was a market for the No.6 in an up-market guise, because they offered the same rifle with high grade finishing, to both the wood and metalwork, and fine engraving to the action. This rifle was marketed as the Model No.7. Would that we had an example to photograph for our readers! 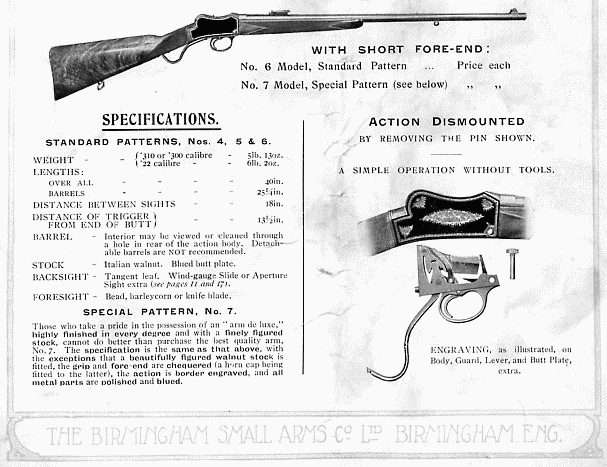 Below is the 1932 advertisement for the Model No.6 rifle, illustrating its continuing longevity. 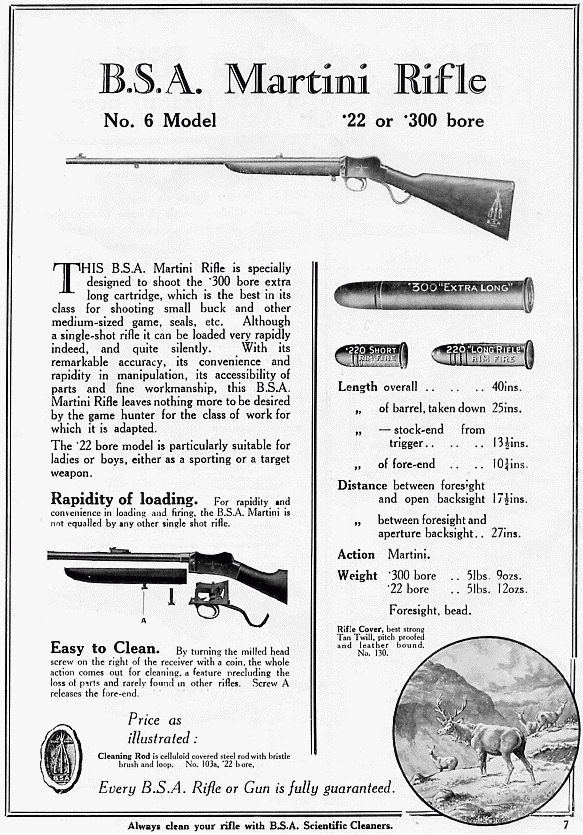 by 1952, the Model 6 was, to all intents and purposes, obsolete, but Alfred J. Parker of Birmingham bought up ex-ministry and other stock and sold these, and other 'previously owned' rifles, either "quite new and unused" or refurbished. 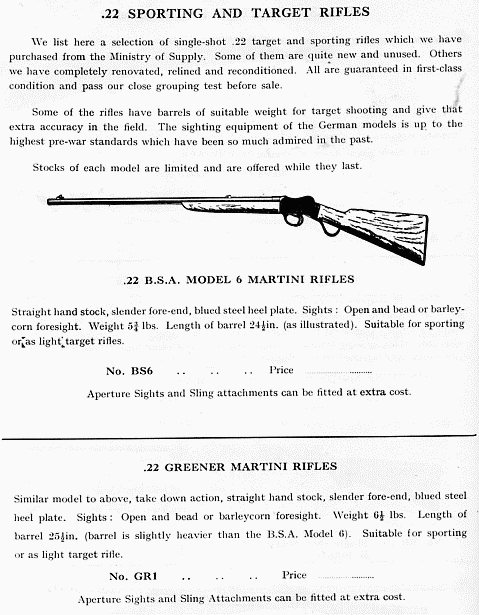