<![endif]-->
YOU ARE VISITING THE U.K. HISTORIC ARMS RESOURCE CENTRE - MINIATURE CALIBRE RIFLES REFERENCE FACILITY
Please be aware that some specialist rotational imagery on these pages may take longer than usual to load
MENU...<.. Should the top navigation menu fail to load immediately please refresh the page or use links ..>.. MENU

and the Lee-Enfield action Trigger Pulls

buta warning is necessary to anyone proposing to adjust their own martini trigger,

either a full-frame, full-bore rifle, or a small bore conversion, or a small-frame, small-bore target or sporting rifle.

Details of this are in the section following the A.J. Parker paragraphs below.

It may be appropriate to quote here a few words on the pull-off of the .22 " Martini "(with the exception of the B.S.A. " International ") The .22 " Martini " has a single pull and adjusting this is a skilled job. I have seen many devices designed to give adjustment and in nearly all cases they are unsatisfactory. Some rifles have been fitted with trigger stops by drilling the rear of the trigger guard and inserting a screw, the end of which will allow the trigger to be pulled to just the minimum to release the tumbler. In my opinion this is of no advantage whatsoever. It has been claimed by some that the method prevents movement of the rifle by the finger after the tumbler is released.

However, if there is movement, it would have started before the release of the tumbler and is a faulty " let-off." The trigger spring should be flexible and this is not always so. It should not become heavier as it is pulled back. The weight of the trigger spring for a 3¼ 1b. pull-off should be no more than 1½ to 2 Ibs. To get the correct strength reduce the thickness from the underside and make it almost even in its full length and a little thicker near the screwhole, avoiding a sharp corner at this end. Weigh the spring and when the correct weight is obtained, the pull can be adjusted at the trigger end and tumbler bent.
Assuming the tumbler bent is a normal one, as provided by the makers of the rifle, the weight required is obtained by slightly altering the angle of the top edge of the trigger. That is the edge which engages the tumbler bent. The pull-off should be clean and sharp and when the tumbler is released no kick is felt on the finger. If there is still a drag, reduce the depth of the bent in the tumbler. If the tumbler or trigger is soft it will soon wear, and a variation of pull will result.
It may be of interest to mention here that if the trigger stop were fitted to a service rifle it would be unfireable. The half-bent is considerably lower than the full bent and would catch the sear every time.

Left: the action with lever forward and breech-block dropped for loading; 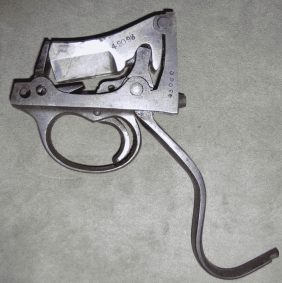 The three configurations as above - in close-up 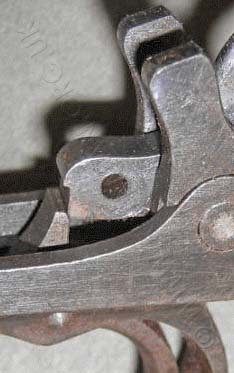 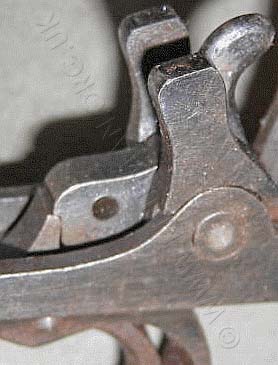 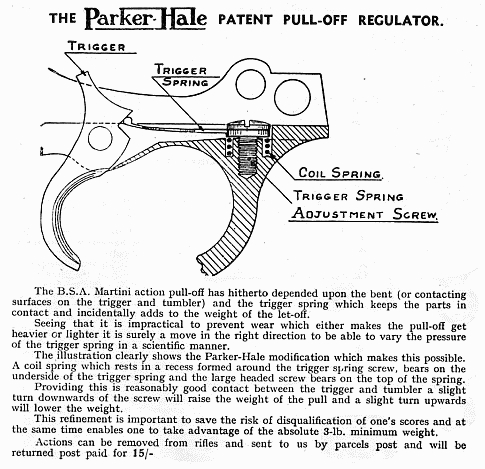 Below: the action disassembled with only the extractor remaining in place 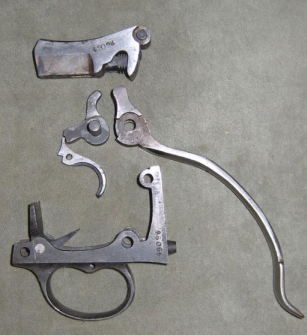 A word of warning to any owner wishing to smooth or lighten the trigger pull of their martini action.

Yes, adjusting the angle of the trigger sear or tumbler bent will change the weight or creep, but there is a snag.

Removal of material from either surface has a major effect on the height of the falling block in the loading position.

The block will lower in the ratio of six-to-one, potentially making loading a round into the chamber problematic.

This could potentially result in the necessity to replace either the trigger or tumbler to correct the problem,

or the need to otherwise add material to either component; not a simple procedure.

To illustrate the point, we have set up an action with a dial gauge on the loading chute,

and placed a "ten-thou" feeler gauge between the surfaces in the second image.

The first image shows the sear/bent normally engaged at zero on the dial gauge, with the under-lever down in the loading position. As the block lowers, the dial rotates clockwise to the '60' calibration; a drop of 0.060", bringing the loading chute below the extractor's chamber cut-out.

Thus it will be seen that adding material to either face will lower the falling block's loading position,

and removing material, by honing either surface, will cause the block to settle higher in the loading position,

accordingly preventing a round from being fed into the chamber.

It is possible to finely adust the trigger face angle without altering its overall height, but this is precision work.

could end up requiring a major part replacement or expensive gunsmith's attention to correct.

It should be borne in mind that spare parts for these rifles can be difficult to find.

To correct the drag, remove the trigger guard and, with

medium emery cloth or very fine cut file, reduce the height of the top stud of the trigger very slightly and repeat until a satisfactory pull is obtained. If the pull is single, straight through, reduce the height of the bottom stud. The face of the cocking piece should be free from dents and have an even surface by using a finishing stone and keeping the strokes vertical to ensure a smooth clean first pull. Sometimes a bent trigger guard can cause a single pull. To discover if this is so, take out the magazine and examine the fit of the guard where it runs along the sides of the magazine. The thin ribs should be down on the wood of the fore-end. If there is a gap, however small, take off the guard and give it the necessary bend and replace. The No. 4 often develops a single pull, through this cause, but it is seldom the case with the No. 1.