The Mauser bolt-action .22 LR rimfire rifle shown first as an example on this page was manufactured by the " Geco" company (Gustav Genschow & Co.), one of many companies sub-contracting for the production of these allegedly sporting rifles ( the German Government - post the First World War - were officially restricted to the production of only sporting arms; military weapon manufacture was more or less forbidden by the Allies . Some years on, the sporting rifles came to bear more than a passing resemblance to the old German service rifle). This new miniature calibre Mauser rifle became known as the DSM-34, by virtue of the " Deutsche Sportmodell" designation and the 1934 year of introduction. The DSM became one of the most common of the German "training" rifles and, as was the 1939 following design KKW rifle ( Klein Kaliber - Wehrsportgewehr ), was modelled loosely upon the Gewehr 98 rifle genre. The DSM could not be fixed with a bayonet, but the immediately pre-W.W.II design KKW was so enabled.

Here is an opportunity to view every aspect of the rifle. 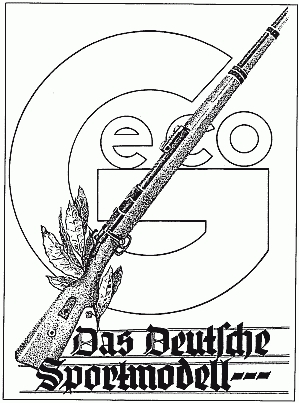 The fore section with front barrel band forming a nose-cap of sorts, the fore-sight arrangement,

and the plain cleaning rod with just a screw-slot at the front end.

Left and centre: the tangent-leaf rear-sight calibrated for 25 to 200 metres 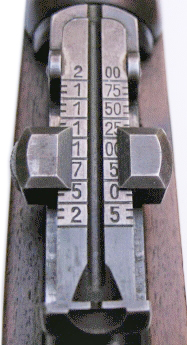 Below left: the barrel stamping

and right: the serial number " 3634 " on barrel and receiver ring

along with the proof and calibre mark for 5.4 mm 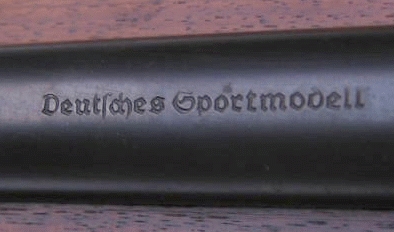 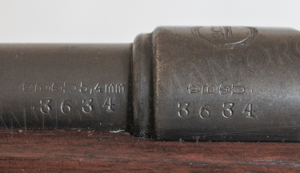 The bolt from above

At the end of the War in 1945, the French Government took over the Mauser factories

and these training rifles were still in production for a short while.

Before long, all the tooling was removed to France along with all the factory stocked parts as yet unassembled.

The rifles were built up in France in the MAS factory, and bore the MAS name thereafter.

What might a young farmer wanting a vermin rifle do when all he has to hand is an old training rifle?

One perhaps needs to bear in mind that this was probably done not long after WWII,

when such arms were rather more common, and of little relative value.

We have already shown a rare telescoped DSM34, but not one like this!

Perfect; it says its a German sporting model! 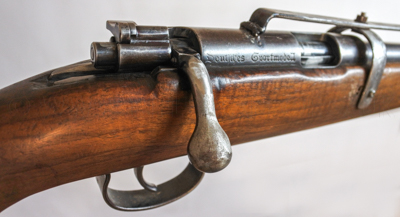 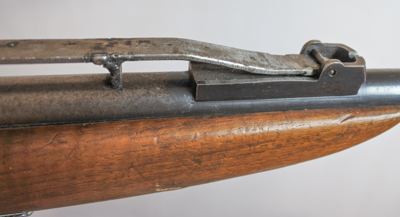 While the work is in progress we notice, for the first time,

that the rifle has markings that say

So now we know where it came from, and our ICI war issue cartridges will be fine. 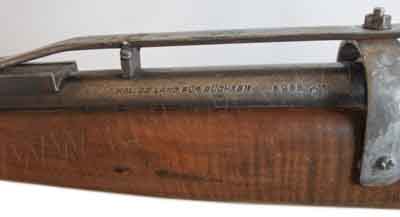 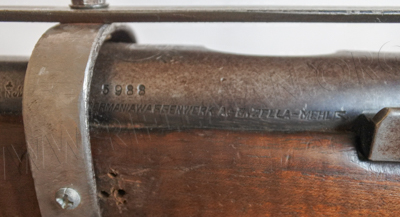 Hmm. May need to practice welding technique before doing another.

There. Look out rooks and rabbits.

Details of the .22RF adapter unit fitted to a Kar98 Service rifle will follow shortly.

The centre-fire bolt-head of the full-bore Kar98 for eventual comparison. 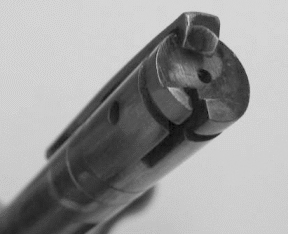 For the most comprehensive record of small-bore Mauser training and sporting rifles,

Or a Chronology of Enfield genre Training Rifles, Adapters & Cartridges