Above and below is the unusual Pattern 18 A.G. Parker conversion of the .303" Short Magazine Lee-Enfield to .22" calibre.

This rifle was submitted to the military for trials in early 1917.

By courtesy of the curator of the Weapons Collection, at the School of Infantry in Warminster, we are able to show a facsimile of the report made 'under minute number 183, to the Small Arms Committee on 16th. May 1917.

I send herewith one S.M.L.E. Rifle, No. 10009, which has been converted by Messrs. A. G.. Parker. and Co. to .220 bore and chambered to take the steel " conveyors " for .220 ammunition in accordance with their service-cum-miniature system. Fifteen steel " conveyors " are also forwarded.

Messrs. A. G. Parker and Co. inform me that the ejecting screw does not operate satisfactorily with the steel carriers, and for that reason it has been found necessary to fit a special ejector to the rifle.

I attach sample targets showing the quality of the shooting.

A 1914 pattern Enfield Rifle adapted to take the steel carriers will he submitted to this Depart­ment by Messrs. A. G. Parker and Co. shortly, and will also be forwarded. for your inspection and comment.

Referred to the Munitions Design Committee by D.D.G.(S.) for consideration.

The Committee would be glad to see the sample 1914 rifle when ready, but, do not see any case for the adoption of this system for the S.M.L.E., especially in view of previous decisions on the subject of adaptors.

At that point, it appears that the S.A.C. did not feel this training conversion particularly worthy of consideration. At a time when manufacture of arms of all types were under the greatest of pressure, it would seem that adaptors of almost any nature were not deemed a priority. It is worthy of note that the secretary of the committee was none other than the author of the famous tome "The Book of the Rifle"; Colonel, the Honourable T.F. Fremantle.

An interesting point here is that the first rifle submitted was described simply as a converted S.M.L.E., and the sample of a Pattern '14 rifle was awaited. By mid-June the "Pattern '14" rifle had been submitted and the committee further considered its merits. Since the War Office eventually gave the Parker converted S.M.L.E. rifle the nomenclature Pattern'18, because of its original date of introduction, it is evident that Parkers submitted both a converted S.M.L.E. and a converted Lee-Enfield Rifle No.3, more commonly known as the U.S. Pattern '14 - not to be confused with the S.M.L.E. .22 Pattern '14 which carried the full title of "Rifle, Short, .22-inch, R.F., pattern 1914".

In spite of the comments of the committee in June 1917, the Pattern '18 S.M.L.E. version was ,as has been written, adopted in 1918, while the .22 Rifle No.3 was never militarily introduced, and seems only to have been supplied to the civilian market or 'volunteer' style units in very small numbers.

The method of converting the bolt for the -220 rim fire cartridges is shown in the.  drawings and description. atttached.     Sample targets to show the quality of shooting are also attached.

The bolt is converted from centre fire to rim fire in the manner shown in the accompanying drawing.

The barrel, is converted from •303 in. to .22 in. on the Parker Rifling System, except that the chamber is bushed solidly, drilled and bored. The barrel is then tubed for its entire length and chambered specially tor the conveyors.

There being no adjustment possible on the bolt, the far end of the chamber on which the conveyor rests, and so prevents escape of gas, is carefully finish--bevelled to gauge, in conjunction with the bolt.

On examination it will he found that we have scraped away small portions of the action body at the forward end of the magazine underneath the ledges at either side.

The slope leading into the chamber has been widened.

The forward end of the magazine platform has been filed to clear the dummy bullets, and a guide has been solde,red under the rear end of the platform to position it, this being necessitated by the removal of material from the body at the forward end.

Referred to the. Munitions Design Committee, by.D.D.G.(S.) for consideration.

The Committee consider the necessity for altering the rifle to suit this device to be a serious drawback, and in view of past experience of adapters they do not propose to re,commend its adoption.

Their weight and the provision of proper magazine fire, clip loading and full-bore style ejection, gave truly representative handling characteristics. Only the noise and recoil were missing; in common with most small-bore training weapons.

(see The Williams Floating Chamber and The Morris and Aiming Tubes)

The picture to the left shows the receiver with charger guide bridge and the .22" bolt head with offset firing pin. Unlike most .22" conversions, the extractor is full width, as on the .303" parent arm. An auxiliary ejector was fitted to the left hand side of the receiver in a freshly machined slot. It was a rather agricultural addition, but proved necessary to assist in the ejection of the heavy steel conveyors (see picture below left).

The steel conveyors were smoothbored and chambered for the .22" rimfire long rifle round. A loading tool was provided to press the rounds into the conveyor, flush with the rim. It was also used to press out the fired empty case. This meant that a man had to be dedicated to clearing and loading the conveyors, not conducive to ease and speed of use. This was probably one factor in the system's limited use in the Military. It was phased out after ab

out only two years in operation. Another minor problem was that the necessary blunt end of the conveyors did sometimes result in a breech jam which the pointed full bore bullet almost (but not completely) precluded. The most significant drawback was the lack of obturation. Unlike a brass cartridge case, the conveyors did not expand into the .303" chamber. The resultant gas leakage is considerable, and any person shooting one of these rifles today would be well advised to wear safety glasses! The image below right shows the conveyors feeding from the magazine. The cut-off was left on these rifles, and is still best used for single shot practice. Parkers bored the original

barrel and fitted a sleeve along the lines of their famous "Parker Rifling" process. Although declared obsolete for military use in 1920, a small number were later sold commercially and a sibling system was still advertised in the Parker-Hale catalogue of 1933, but as "applied to Vickers Machine Guns for non-automatic firing practice on miniature ranges".

This shot of the muzzle well illustrates the sleeving. Close inspection shows either the use of a steel olive at the front of the sleeve - a precursor to the brass ones later fitted to Parker Rifled arms, or perhaps indicating the fitment of a replacement at some stage in this example's lifetime. In good overall repair, the weapon shows typical signs of significant use, and has the stain marks down the woodwork born of regular cleaning at a time when black powder was the propellant, and of having been frequently stood in the rack without being wiped down.

~
and the barrel reinforce has a multiplicity of

markings for modifications and proof with the

below which was added

~ & Co. Ltd. BIRMINGHAM .22 PATT' 18 " ~ The line above "& Co. Ltd" is missing, either poorly impressed or ground from the stamp. It is possible that it would have read - A.G. PARKER ~ since the two companies were so closely entwined.

The long range rear aperture and dial sight are retained.

The bolt head is a modification of the .303"original with the "U" stamp, rather than

the later purpose manufactured ".22" head. The butt stock disc gives the unit to

which the converted rifle was issued as the Officers Training Corps. An unusual

career's end for a 1912 Enfield manufactured S.M.L.E. Mk.III. If only such historic

Below right is the loading tool as illustrated in the advertisement alongside. With the hand lever to the side shown, the fresh cartridge is pressed ( carefully) into the conveyor. The standing post on the right hand side receives the ejected conveyor carrying the fired cartridge case. The conveyor is slid over the post, neck downwards, and the lever brought over to that side. The empty case is then pressed out of the conveyor through the clearance hole in the lever arm. To keep a squad of recruits on the firing points supplied with ammunition would have been no mean task! 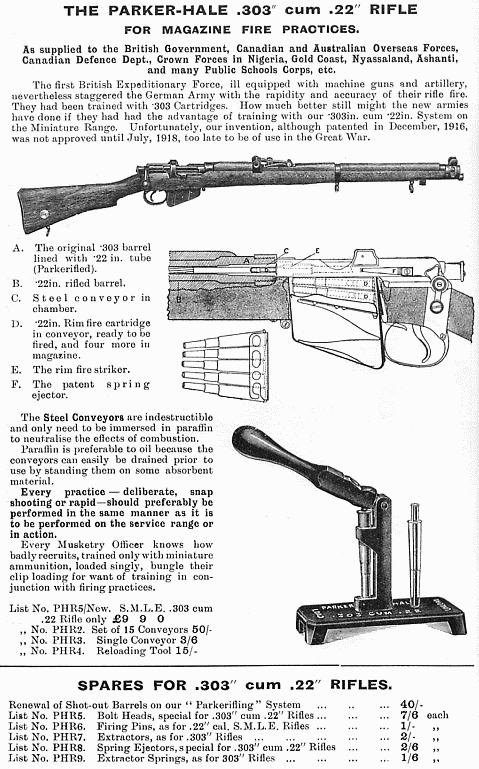 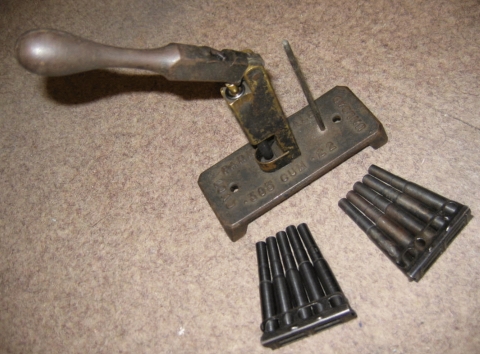 Below right is an advertisement for

the equivalent equipment for use with

The fabricated rod tool below,

one of a pair of designs,

is alleged to be a device for pushing the

fired empty cases out of the conveyor.

The sliding leather washer fitted over the rod

appears to be the same part that is normally

in the Enfield rifle butt,

to protect the oil bottle there stored.

Return to: SITE MAP or MENU PAGE or TOP of PAGE