The next stage of progression from the B.S.A. slide or "pump" action rifles, the Ralock was specifically aimed at the increasing number of imported semi-automatic .22RF repeating rifles, particularly those from the Unites States of America.

Introduced late in 1947 chambered for the .22 Short cartridge, of innovative design and superb quality, the rifle was expensive to manufacture, had limited magazine capacity, and was perhaps less reliable than other contemporary tubular magazine fed equivalents, the Winchester and Remington semi-autos in particular.

Although the 'Short cartridge' model of the rifle would hold a dozen cartridges. Although the rifle was, in 1949, lengthened by five inches to 43¾ ins., to accommodate the .22 Long Rifle cartridge, the available butt length still restricted the Long Rifle model to only eight rounds capacity.

Below: the elegant B.S.A. Ralock

Below: the 1947 advertisement for the 'new' rifle 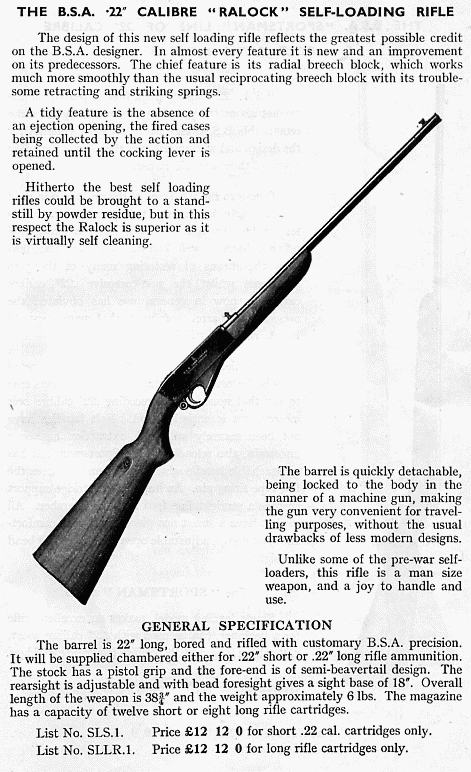 With a beautifully engineered, novel and quick take-down design, the retention of fired cartridge cases within the body, and an almost sealed action preventing the ingress of foreign matter, the Ralock should have been the sportsman's perfect rifle.

It is a reasonable inference that the name given to this rifle was derived from its radial locking action; thus Ralock

The action design comprised a blow-back breech-block in the form of a near quadrantal segment of a circle. This pivots at its base and is locked back - and the rifle cocked - when the integral trigger-guard and underlever is pulled down. This movement also opens the space beneath the action in which the fired empty cases are held; a very environmentally tidy rifle, this one! This should not be done too soon after rapid firing; if the just-fired cases are tipped straight into the hand, one is likely to drop them 'toute suite'.

This rifle has been fitted with a Barr & Stroud telescope sight

Below is a 1953 advertisement for that 'scope.

Not the most successful of products from the Birmingham Small Arms Co, but certainly with an acceptable performance and an economically priced rifle which found favour in the appropriate quarters

Below: A mid 1960s advertisement for the Armatic

Click on the diagram below to view at full original size